For Email Newsletters you can trust

The Mt. Sinai Board of Directors has decided to continue to require masks and social distancing in the Synagogue. Masks are available in our front lobby. No one will be turned away or prevented from entering the Synagogue to pray and worship. The Board does not want anyone to get sick after a visit to the Synagogue.

Weekly Message from the Board President

Let’s Party!  It’s time for the annual Hanukah party at Mt. Sinai.  The party will start at 4:30 PM on Sunday, December 5, at the Synagogue.  Sisterhood will be busy earlier in the day, making latkes, sufganiyot, Jonathan Savelle’s famous Kugel, and other treats.  Then we’ll line a wall of the social hall with menorahs, and all light them together.

Rabbi Halfon will be in town and will lead the service and singing.  We’ll see how skilled he is at dreidel… there will be Hanukah gelt up for grabs.

Hanukah is already underway, and Rabbi Halfon will lead a candle lighting ceremony tonight via Zoom.  Here’s what he says about it:

Rabbi Moshe will lead a brief (one hour max) Hanukkah ceremony for the second night of Hanukkah (“Zoomakkah”) on Monday at 6:30 PM MT.  He will lead this evening from his current home in Long Beach, and arrives in Cheyenne on Tuesday, November 30.  He is available on other nights of this week at the same time to enjoy a virtual Hanukkah with you and yours, either from the synagogue or elsewhere.   Please check the synagogue website or call the synagogue for updates, or contact Dave Lerner.

Here’s the Zoom info for tonight’s candle lighting.  It starts at 6:30 PM.

To get you more into the spirit of Hanukah, and get your toes tapping, here’s a dance and music mashup of Hanukah songs from Elliot Dvorin and the Key Tov Orchestra.

Rabbi Halfon is participating in the Hanukah candle lighting at the State Capitol.  The event is organized by Rabbi Zalman Mendelsohn, the Chabad Rabbi in Jackson.  It takes place Wednesday, December 1 at 11:15 AM in the West Hall of the State Capitol Building in Cheyenne.

Have you voted yet?  You can vote in person, but we also mailed out proxy ballots for our annual congregation meeting.  It’s coming up on Sunday, December 19.  We’ll start with a brunch at 10, and the annual congregation meeting starts at 11.  You’ll get an update on the Synagogue activities for the past year, and the plans for 2022.  You’ll also be electing three members to the Board of Directors.  There are four candidates running for three seats (so if you vote via mail, only vote for three).  The candidates are Dave Lerner, Steve Borin, Denise Bendori, and Tikvah (Therese) McKinnon.

The See’s Candy Sale is underway at the Synagogue. You can order online at our website, or buy in person at the Synagogue on Sundays from 10 to 4, or by appointment. The sale is going very well… which means place your order now before they run out.

The Endowment Fund has been raising money in the month of November for a chair in the large sanctuary to honor Joe Golden.  We’ve talked about his significant contributions to the Synagogue in time, energy, and enthusiasm.  Joe has been a very active volunteer and has made a real difference in our community.

A chair is $500, but an anonymous donor will cover half that amount under certain conditions.  If you would like to donate, please use our website or contact the Synagogue office.

We have one more Hanukah tidbit.  This is another cartoon sent to us by Babs Klein. 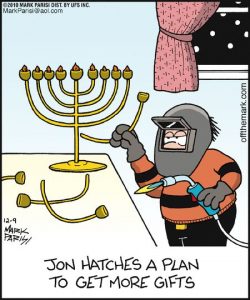 Here’s our Yiddish Phrase of the Week: 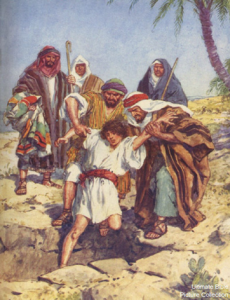 Thrown into a pit 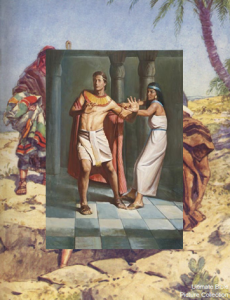 The Story of Joseph is the longest single story and one of the most famous narratives in the entire Bible: Chapters 37-50; from here to the end of Genesis.  As you know, this story has inspired commentaries, interpretations and even a modern play.  The story of Joseph and his brothers seems like is a cautionary tale about the disastrous results of family rivalry.

Genesis is filled with dreams, especially in this portion.  In Biblical times, people thought that God communicated to people through dreams. There were professional dream interpreters.  Even today, psychologists and people in general believe that dreams are important; they help us sort through the unconscious. Vayeshev begins and ends with dreams.

In Gen. 37:6-9, Joseph has two dreams, which he, his brothers and father all interpret as him ruling over them.  The brothers already hated Joseph because he was clearly Jacob’s favorite son as evidenced by Jacob giving Joseph a “coat of many colors” (Gen. 37:3).  Such a coat was symbolic of leadership among Semitic chiefs of the time, and was still in use the time of King David

As in the story of Cain and Abel, and hinted in the tale of Esau and Jacob, in Genesis 37 once again fratricide is contemplated.   The brother consider murdering Joseph but then decide to throw him into a pit. Judah argues against murdering Joseph, instead suggesting selling him to the Ishmaelites   In Gen. 37:18-30, rather than just have Joseph not return, the boys dip Joseph’s coat into blood and tear it apart, and tell Jacob that a wild animal killed him.  Once Joseph arrives in Egypt, his troubles compound, but improve in Chapter 39, when Potiphar chooses him to run his estate.  But then he is thrown into prison when Potiphar’s wife accuses him of molesting her.   Yet in prison, he becomes a lead prisoner.  Then we hear another dream story: the dreams of Pharoah’s cup-bearer and baker, who are also in prison (Gen. 40:5-19).  After Joseph interprets their dreams (Gen. 40), he asks the cup-bearer to put in a good word for him when he is restored to his position.  But the man does not remember to do so, so Joseph remains in prison.

Parashat Vayeishev introduces the Joseph saga. When it begins, Jacob’s 11th son, Joseph, is a 17-year-old shepherd working in the fields alongside his older brothers. The text’s description of him as a “youth,” na-ar, is apt, both biologically and emotionally. As Avivah Gottlieb Zornberg writes: “Joseph behaves with the narcissism of youth, with a dangerous unawareness of the inner worlds of others” (Zornberg, Genesis: The Beginning of Desire [Philadelphia: JPS,1995], p. 253). He consciously tells Jacob malicious tales about the brothers and by wearing the beautiful, multicolored coat (or ornamental tunic) that Jacob has given him, flaunts the fact that he is the favorite son. It is thus not surprising that when Joseph’s brothers see that their father loves him more than they, they come to hate Joseph (Genesis 37:4).

The medieval rabbis Rashi and Nachmanides (Ramban) excuse Joseph’s behavior because of his youth, citing variations on midrashim such as B’reishit Rabbah 84:7, which describes Joseph as “penciling his eyes, curling his hair, and lifting his heel”…The nasty stories that Joseph tells Jacob about his brothers may well be true and his tale-telling, like his flaunting his appearance, expressions of childishness….

Joseph’s early use of his gift to interpret dreams is similarly immature. The ways in which he describes their content reveal an egocentrism and indifference to the feelings of others that make the young Joseph a difficult figure to admire. When, for example, he tells his brothers about a dream of his in which they were all in a field tying up sheaves of wheat, when his rose and stood up straight while their sheaves paraded around and subsequently bowed down to his, it is no wonder that his brothers “hated him all the more for his dreams and for his words” (Genesis 37:8). Even more so, when he tells the brothers that he dreamt of the sun, moon, and eleven stars bowing down to him, his brothers come to detest him, for even before he provides an interpretation, Jacob, who is also a dream interpreter, rebukes Joseph for insinuating that one day he, Rachel (Joseph’s mother), and the brothers would have to “bow down to the ground before” him (Genesis 37:10). It is thus understandable that after Reuben convinces his brothers not to kill Joseph, as they initially planned to do, they agree to seize him, remove the coat that he had flaunted before them, throw Joseph into an empty pit without water, and sell him to the Ishmaelites as a slave. The Ishmaelites then take Joseph down to Egypt where they sell him to Potiphar, one of the officers of the Pharaoh (Genesis 37:28-36).

Yet after Joseph is put in prison for sexually assaulting Potiphar’s wife (Genesis 39:11-20), an accusation that appears to be untrue, Joseph undergoes a significant change. For the first time, the biblical text describes God as being with Joseph. It is God’s kindness that leads the prison warden to look favorably upon all that Joseph does, consequently appointing him as chief overseer (Genesis 39:21-22). Presumably, it is God’s constant presence that gives Joseph a maturity and sense of humility that previously he did not possess. Thus, when the Pharaoh’s imprisoned cupbearer (chief butler) and baker come to Joseph to interpret their dreams, Joseph first says: “Surely interpretations are in God’s domain; but go ahead and tell them to me” (Genesis 40:8). And when they tell him their dreams, he interprets them truthfully and, it turns out, accurately with the self-aggrandizement of the past gone. To the cupbearer, whose dream, Joseph says, foretells his being restored in three days to his former position, Joseph simply requests that when all goes well for him he remember Joseph and ask Pharaoh to release him….

Self-centered, immature, and at times mean-spirited, Joseph does not yet display sufficient leadership qualities. It is only later, after experiencing the negative consequences of his words and actions towards his brothers, opening himself up to God’s presence when in prison (although it is unclear whether he is aware that God is with him), and using his gift as an interpreter of dreams not to uninvitingly boast about his superiority but to thoughtfully and honestly help others learn about their future, that Joseph begins to show himself worthy of becoming a leader….By the end of this week’s parsha, Joseph appears wiser, though naïve. The cupbearer forgets to speak to the Pharaoh about Joseph. Thus, “learning from his mistaken trust in the butler’s gratitude, next time,” notes Kass, “Joseph will take matters into his own hands” (p. 561). It is only then that Joseph actually will become a leader.

Dr. Ellen M. Umansky is the Carl and Dorothy Bennett Professor of Judaic Studies at Fairfield University in Fairfield, CT; Professor of Religious Studies; and director of the university’s Bennett Center for Judaic Studies. She is a long-time member of Reform Congregation Kol Ami in White Plains, NY.

For a little humor, here is a subtitled episode of the Israeli comedy show “The Jews are Coming.”  Remember, it is a comedy, so don’t take it too seriously.