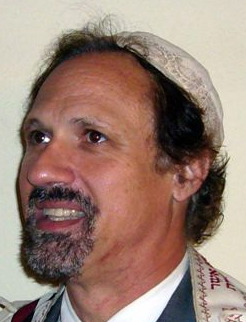 Rabbi Moshe Raphael Halfon has served as a pulpit rabbi, cantor, Hillel director, and chaplain, as well as a musician and special education teacher.  “Reb Moshe” is an accomplished guitarist and singer who performs Hebrew, Yiddish, Ladino, Middle Eastern, blues, jazz and folk music.  His album of Jewish healing chants Let There Be Light is used by communities and healers worldwide.  Some of his past pulpits include Temple Israel of Long Beach, CA (Reform), Temple Ami-Shalom of West Covina, CA (Conservative), and Agudas Achim of Attleboro, MA (Reconstructionist), and in each position he enhanced membership, education, and the synagogue’s community profile.  He has officiated at hundreds of B’nai mitzvah, weddings, conversions, and funerals, including mixed and same-sex weddings.  He has taught Jewish history, Kabbalah, meditation, percussion and dance internationally, and served as adjunct professor of religion at Cypress College from 2001-2005.  For the past fifteen years, he has been Jewish Chaplain at the California Institution for Women in Corona, California, a minimum-security prison, where he established Congregation B’not Or.  He founded and directs Am Or Olam (People of the Eternal Light), a non-profit spiritual organization for the arts, counseling, and adult education.

Rabbi Halfon was ordained and received a Doctor of Divinity at the Reconstructionist Rabbinical College in Philadelphia, as well as a Masters in Educational Psychology at Temple University.  Among his mentors there were Rabbis Zalman Schachter-Shalomi z”l, Arthur Green, Arthur Waskow, and Cantor David Tilman.  He also studied voice and music theory with renowned Hollywood voice coach Joel Ewing, and African, Latin and Middle-Eastern percussion with several professional performers.  While completing his BA in Jewish Studies at UCLA, he founded the Westwood Bayit student co-op, edited Ha’Am newspaper, and ran the first Jewish Arts Festival.  Rabbi Moshe is fluent in Hebrew, Yiddish, Spanish, and Portuguese, and lived in Israel for two years.  His perspectives are broad and deep: he was raised in the Reform movement, yet studied in Orthodox and Hasidic circles; he is a Reiki Master healer who regularly practices yoga, meditation, and Tai Ch’i; and his hobbies include swimming, cycling, snorkeling/scuba, hiking, and organic gardening.

Rabbi Moshe says, “People often tell me that I have been a midwife for their soul.  I integrate tradition with contemporary life issues in order to heal the imagined rifts between Soul, Mind, Heart, and Body; between tradition and creativity; justice and mercy; male and female; Divine and human; intellect and intuition.  This is part of my task in this life.”

The Mt. Sinai Board of Directors has authorized the Rabbi to charge fees for Life Cycle Events for individuals and families.  These including weddings, B’nai Mitzvahs, Bris, Baby Naming, Unveilings, Funerals, Conversions, and more.