History of the Congregation

In March of 2021, the Intermountain Jewish News did a story on how Mt. Sinai dealt with the one-two punch of losing its Rabbi, and closing the building because of the Coronavirus pandemic.  You can read the article here.

Cheyenne became a town when the railroad reached it in 1869. It had been a construction site from 1867. Among the first settlers there were two Jewish men, William Myers and Max Idelman, emigrants from Germany seeking religious freedom. By 1888 there were enough Jewish families to incorporate Temple Emanuel, and student Rabbis from a Cincinnati Seminary were brought to Wyoming to lead services during the High Holy Days. 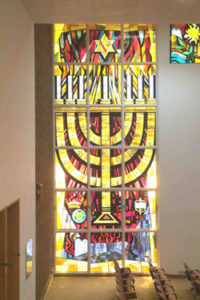 During the early years of the 20th century immigration from Eastern Europe, mainly Russia, Poland, Hungary, and Czechoslovakia began to settle in America. Some came to Wyoming because of free land offered with the Homestead Act. Some came west seeking more opportunities. This wave of immigration was mostly Orthodox in there beliefs, and in 1910 Mt. Sinai was incorporated in a small house on Eddie Street (now Pioneer and 20th) and built the first synagogue, setting the cornerstone on October 24th, 1915. Another migration came after the second World War and the Holocaust.

As the old building was out-dated and inadequate for the increasing congregation, the late H.R. Cohen, Dave Wolfe, Herman Pasternack, and Sam Stark purchased a lot on the corner of 26th and Pioneer, where the current synagogue was built. Mr. Cohen headed the building committee and the contractor was Carl Christiansen; a new cornerstone was laid in the Spring of 1950. The building was dedicated in 1951 including a sanctuary seating 450, a small sanctuary for daily prayer to accommodate 30, a social hall for dinners; a full kosher kitchen facility, several classrooms, and a Rabbi study. An adjoining lot was added for a grassed area for picnics and social events.

The main sanctuary features stained glass windows, the largest one of fifteen panes has a candelabra twelve feet high, a menorah, dedicated in December 1972. Also on the southern wall are twenty windows depicting highlights in Biblical history and a bank of twelve windows of the twelve tribes of the Bible adjacent to the altar. As the sun illuminates the various colors of the stained glass it is breathtaking in its beauty. This project, conceptualized by the late George Kaufman and John Veta, was used as a fundraising tool to finish some of the building costs. All of the windows were created and installed by the members of the Watkins Family Stained Glass Studios of Denver. The opposite wall in the sanctuary has twenty windows depicting the major Jewish holidays and was dedicated in 1977. All windows with one exception were purchased by members of the congregation in honor or memory of family. The one exception, a pircture of modern Jerusalem, was dedicated to a non-Jewish doctor of Scotch descent, K.L. McShane, a long-time friend of the Jewish Community. It is on the left of the north side windows.

A unique feature of the synagogue was first viewed as a disaster when the contractor discovered a stream running through the property. Now that stream enables the synagogue to have a highly valued ritual bath of “living” water in its partial basement.

The building includes a library of Jewish books, tapes and periodicals, currently chaired by Dorothy Feldman in memory of her late husband, Joe Feldman. His extensive collection of books has been doubled by donations of many people who lived in Cheyenne and left their treasured books to the library upon their death.

Historical Marker – The first Permanent Jewish Synagogue in Wyoming was erected in 1915 by Cheyenne’s Mt. Sinai Congregation.  German Jewish merchants came to Cheyenne starting in 1867, organized but were unable to build a Synagogue.  After 1900, with the arrival of Jewish immigrants from Eastern Europe it became possible to both organize and build.  This Synagogue was replaced by one at 2610 Pioneer which was dedicated in 1949.

Jewish settlement in Wyoming has been called the furthermost reaches of the Jewish Diaspora since it represented settlement far removed from the limitations that had been placed on Judaism in Germany and Russia.  Jewish participation in the life of Cheyenne and Wyoming has made the slogan “The Equality State” more meaningful.

The following is a speech given by Sandra Vinnick on May 12, 2014. Ms. Vinnick was the recipient of the Rocky Mountain Jewish Historical Society’s 20th Annual Heritage Award at the University of Denver’s Center for Judaic Studies.

Chancellor Coombe, I cannot begin to tell you how much it means to me and how honored I am to have you here to present this award to me.  The University of Denver is an outstanding institution and much of the success has been brought about by your leadership and tireless efforts. You have led with warmth, intelligence and always a sense of history.  Thank you from all of us!

Speaking of history,may I say again, how grateful I am to the Rocky Mt. Jewish Historical Society and Beck Archives under the outstanding directorship of Jeanne Abrams for keeping accurate documentation of our history for future generations.

First and foremost, I am grateful to America for welcoming my people and allowing them to live free of discrimination and humiliation – to coexist in peace and enjoy religious liberty.  We owe this country everything and we will continue to strive to help America prosper and maintain the principals of a democracy.

It is not just me who is being honored tonight – it is every one of you sitting in this audience.   When my mother passed away a few years ago, I was informed by strangers of our rich heritage and my wonderful legacy.   Dave Forman, who headed A.G. Edwards in Cheyenne and managed their investments, wrote me the most beautiful note about my mother, how impressed he was with her business acumen, well read, beautiful & charming.

When I called to thank him, he said that he had made a study of the pioneers of Cheyenne, and my grandfather, Sam Marchick, was one of these people.  He invited me to meet with him for lunch and he would tell me what he had learned.  It took a while, we met and it was nice to hear such good things.

My grandfather brought business to the town, built the first shopping center across from the airport, etc.   When we finished I walked over to the Tivoli, the high class beer garden my grandfather had owned for many years.  The city took it over soon after he died, noted as an historic building – it was the Chamber of Commerce.  When I walked in there was a lovely water color painting of the Tivoli with the cowboys in front on their horses.  I said this was my heritage, do you have any copies I may purchase – I bought them for my cousins and myself.  When I turned the painting over, the artist had written a bio on the Marchick family.  As I left with my painting, the head of the Chamber of Commerce called to me and said “you know, this town has not been the same since you people left.” I said “what did you say?”  And he repeated the statement.  I thought that was the greatest compliment I had ever heard – it applies to every one of you.  Soon after, I had a plaque placed next to the historic plaque and told the story of Sam Marchick, bringing business to Cheyenne and helping build the first synagogue.

My legacy!  A few years ago I received a call from a physician in Cheyenne asking if I were Sandra Waldman Vinnik.  He had just purchased my home at 4th & Central.  My grandfather helped all of his children purchase homes.  Not grandiose, contemporary, cream colored brick, all round and sitting on a lovely piece of property – my aunt Arline Ambush had lost her husband and lived with us – she loved to garden and our flowers were always lovely.  My mother was president of Hadassah and the YWCA – his mother was on the board of the YWCA & he had an occasion to be in our home.  He said he admired my home and my mother and said if the house ever went up for sale he would purchase it and so he did.  He asked a few questions and said he would like to make it as lovely as it was when my mother had it —when finished he asked if I would come up and see it.  When he invited us, I asked if I could bring my children & grandchildren.  Quite a tribute to my mother.

Wyoming became a state in 1890 44th state– Cheyenne is the state capital in Laramie County.

Union Pacific Railroad was the lifeblood of the city – headquarters and distributing point of immense agricultural and stock raising area – equipment was always needed.  Army posts – Cavalry base, Fort Warren, Air Force Base and missile base – contributed greatly to the economy of the city and the people of the city took care of the men at the base.

Two major highways going thru the town and motels and hotels were necessary and our people built & purchased them.  Outstanding was Hitching Post owned by Harry Smith and the Anons – outstanding Smith family in Laramie – furniture business leaders – Mona Smith Kahn’s family.

I am only naming a few – I have left out many – smart, tough, strong, resilient with hearts of gold.  God bless you all.

These Cheyenne women went to the Synagogue and prepared the food for my wedding – what a group!  I will never forget these women, their good hearts and generosity.

I am not a cowgirl, but I sometimes feel like one – I revere the west, the wonderful open space, majestic beauty,  a hidden toughness in the people in preserving this – I am aware of what it took to settle here.  The spirit of the west is always with me.